“Neil, you are going to be late for your soccer practice!” Neil heard his mother’s voice over the music that was playing in his room. He knew from her tone that it was probably a good idea to switch the music off. He did that and reluctantly stepped out.

The soccer field was filled with activity and the practice went on as usual. Neil followed the coach’s instructions but a corner of his mind was repeating the musical notes he had heard in the morning. He could not wait to be somewhere else.

He came back home exhausted from the practice. “Mom, I don’t feel like eating. Can I go to my room?” he asked. He could see his mother’s exasperated face but he was so tired of these practices. He was tired of all those classes and his school. “Neil, you have so much potential. You are one of the brightest students here. Only if you paid attention,” he had often heard his teachers say. He ran to his room, threw himself on the bed and turned the music on. 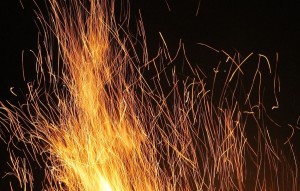 As his favorite Star Wars theme blasted in the room, the ceiling came ablaze with a bright orange color. The room was flooded with a yellowish hue. Neil’s eyes widened. He quickly extended his hand and turned the music off. The ceiling went back to its usual whitish shade. He turned the music on again only to feel red and orange flames dancing in his mind. He shivered a little.

What was going on? Something was different. Something had changed. As he got out of his room, he knew in his heart that it was he who had changed. Had his obsession with music finally made him crazy? Ever so slowly, he went to the living room where his mom was talking on the phone. As she talked fast, a few green slivers hovered around him and vanished. He trembled and stepped out of the house unaware of where his feet were taking him.

A girl in a long dress was standing near the stream in front of Neil’s house. “Oh hello,” she said and tilted her head to look at him. Neil was about to ignore her and move past when he noticed that she was holding a small guitar. He stopped.

“Do…do you play that?” he asked. “Yes, I do” she spoke softly. “My songs are mostly lavender and purple.” Neil’s heart almost skipped a beat. He wasn’t sure what he had just heard. “Are lavender and purple…is that like a band or name of a song or something?” he asked. “No silly, those are the colors I see, those are the colors I mostly play.” Neil exhaled slowly and nodded.

“Umm, can you play the Star Wars theme?” he asked. “I don’t but looks like you may be able to. Here, take this. It’s yours!” She placed the guitar in his hand and briskly walked past the stream. The bell-shaped flowers on her long dress shimmered as she hummed and disappeared into the woods.

Neil sat down, put his head on the guitar and stayed still for a long time. Then with a swift movement, he stood up and strummed several high chords. He held the guitar tightly as he felt red, bell-shaped flakes all around him. He lifted his head high and said, “this music is mine.”