The door opened and a boy stepped out with two small pumpkins and a ghost held in his hands. He placed the pumpkins carefully outside the door. Then he climbed on the maple tree in the front yard and hung the ghost on one of its branches. 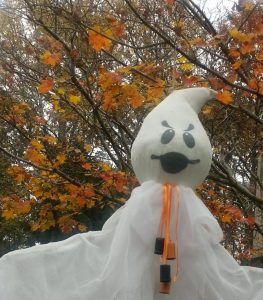 A little leaf, very excited to see the ghost, jumped up and down and yelled “it’s time!”. Indeed it was that time of the year when white ghosts sway in the front yards, silvery cobwebs take over the bushes, maple trees burst into brilliant colors of peach-orange and kids everywhere turn into superheroes!

The little leaf had secretly decided that it was also going to be a superhero. It was going to wear the best red color possible amid its neighboring peach-colored leaves. Soon the trick-or-treating kids would pass the tree, and they would surely stop and say “Oh look, what a bright little hero!”. The leaf would then beam with happiness and pride. How it had dreamt about that moment. That moment felt like a sip of warm apple cider on a fresh day in Fall.

But sometimes things don’t exactly happen the way you imagine them to. Stuff happens. And so it did. This time, it happened in the form of a storm. The storm moved slowly and engulfed the maple tree. Some of the wiser and bolder leaves asked everyone to stay calm. The ghost assured everyone that the storm would be over soon. It had survived many seasons after all.

The little leaf shivered. Why was it getting hit so hard by the cold rain? Was it facing the direction of the storm? Had it jumped up and down too much earlier? Of course, sometimes there are no good answers. Sometimes there are no good questions. Memories of that one moment when it had seen the ghost and felt so elated, were fading fast. “C’est la vie” the little leaf murmured but in its heart it very much wanted the storm to be over.

If a storm comes to your doorsteps and stays for a few hours, you can watch it in dismay. You can shudder with every crackling thunder and hey, even curse if you want. What if the storm stays for days and days? Well, then you just shut up and count the days. The tired little leaf covered its eyes and kept counting. Slowly the counting stopped but the storm did not.

After a very, very long time (well, nobody knows exactly how long because like I said, there was no one counting), the storm was gone. The little leaf managed a weak smile and looked around. Hold on! Something felt very different. For one, it could see the cleared sky, which it typically never did. It could also see all the other maple leaves in their soothing peach-colored outfits, waving gently.

“What’s going on? Why are you all so tiny?” the little leaf shouted. Something was not right. It clenched its fist. Now leaves don’t really have fists to clench. But if you had looked closely, you would have seen the little leaf all curled up. You would have also noticed how  it was trying hard to hide the tears that it was too proud to show.

The leaf exhaled slowly and as if in a flash, it saw everything. It knew it had fallen and was now separated from the tree. It knew that life could not be normal anymore. Rather, there would be a new normal to find. It would focus on itself and find its strength. It didn’t know how; these things weren’t easy after all. Perhaps the passing day would take care of it. Perhaps the setting sun knew how to do it. Maybe the leaf simply needed to rest. Whatever it took, the leaf would do it. It would keep working on it slowly and silently, and it would let the tears roll if they had to. With that thought, the leaf finally closed its eyes. The last sound it heard was the boy shouting “Mom, look at this maple leaf!” 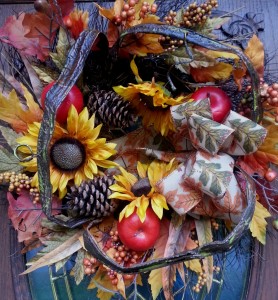 When the leaf opened its eyes, things still felt quite different, and yet all around it was a warm glow of the morning sun. It noticed that it was next to a big bunch of sunflowers, some bright red berries and brown grapevine twigs.

Seeing its puzzled expression, the sunflower laughed and said “We are all part of a wreath that the boy and his mom made last night. See how beautiful you look!”

Indeed. The little leaf could see the boy and his mom sitting on the doorsteps and chatting excitedly about their upcoming Halloween party. It was going to be the most fun (or funnest as the boy liked to say) and scariest party in the neighborhood. There would be spooky masks and skeletons that sat up in the front yard. There would be buckets and buckets of candies, fake cheese fingers and wiggly worm gummies to chew on.

As the leaf watched them, the maple tree seemed so distant. The wind blew softly. Several leaves swirled away and disappeared in the sky. Suddenly the sky had an orange hue. Had those whirling leaves also found their home somewhere in the sky? The little maple leaf wondered. It took a deep breath and rested lightly on the wreath.

2 thoughts on “The story of a little leaf”