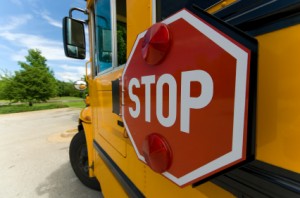 On many mornings as I am driving, I suddenly have to hit breaks and stop. There is a part of the road that slopes upwards. As my car accelerates to get past it and starts speeding down the slope, there is this school bus waiting on the other side with its STOP sign flashing. A little annoying right, when you are rushing to get to work? But when it happens again and again, you tend to pause, lean back in your car and notice things.

The first thing I noticed was a woman standing in the driveway next to the school bus. She had very long straight hair, loosely tied in a ponytail. She also had a striking smile. From what I could tell, she looked young. Then I saw the bus driver pushing a wheelchair up the ramp of the bus. I figured it was the woman’s kid in the wheelchair. Then that became a routine. The mother would stand in the driveway, the bus driver would get off, push the wheelchair carefully inside the bus, the mother would smile and wave to the kid, then the STOP sign would go up and the cars would start rolling. Typically I didn’t notice the kid. I always looked at the mother. I would wonder vaguely if her life was very different. On many days when our timing matched, I would see her – sometimes waiting patiently in the rain with an umbrella, sometimes in a tight long coat standing in the cold, always waving, always smiling.

I saw the same scene again today but something was slightly different. It was a hot summer day.  The kid sitting in the wheelchair was wearing a round big hat like the ones worn by girls. Oh, was that a girl? I thought to myself. How I had never noticed that until now. But there was something else that was different. The mom had a cane in her hand and she was leaning against it. My heart sank. I calmed it down by telling myself that maybe she had sprained her foot and that she would have to use the cane temporarily for a few days. Then I noticed a man standing next to her. I assumed it was her husband. He was twice as cheerful! As the wheelchair was being pushed inside the bus, he waved and jumped, he made a little bird shape with his hands and made the bird chirp. As I was watching them, thoughts came flooding to me. I thought this was a happy family, a smiling family. I thought the couple must be doting on their kid. Then all those times when I yell at my son over small things came rushing to me. All those times when I struggle to get on the same page with my husband regarding some matter related to my son flashed in front of me. It seemed to me that in this family, everyone was always on the same page, the smiling page. They had to be. In hindsight, I am sure they have their own struggles and disagreements that they have to sort through but in that moment, they looked happy..perhaps happier than my family and I felt a slight gust of jealousy pass through me.

As I sat in my car watching them, the dad kept waving and jumping. Then he did a Thumbs Up with both his hands and I smiled. I almost visualized the kid enjoying the whole act very much and giggling. Then he did several quick salutes as if he was saluting the kid. I couldn’t hold myself together anymore. Tears rolled down my face. The STOP sign of the bus was going up. My car had started moving. Mom and dad were both still there. I suddenly felt like I wanted to wave to the mom. I realized I was already doing that only when I saw her looking at me, smiling and waving back.