The sun shone bright that morning. “Is it the first day of summer vacation, mumma?”, asked Lily while still in bed. “Yes, it is”, Piya replied. “That means no school, right?”, Lily felt she had to ask to make sure. “Yes, dear”, Piya put her cup of hot ginger tea down and walked towards Lily, who was still buried under her blanket. Lily loved to sleep for long hours and Piya liked to let her sleep to her heart’s content, sometimes even letting her skip the early morning half day school on Saturdays. In the town where they lived, it was quite unusual for kids to sleep like that, for all parents were convinced there was always something that the kids had to do in the mornings – either go to school or pray or recite something.

Lily had now jumped out of the bed and throwing her arms around her mother, she yelled, “That means we are going to grandma’s house, right?”. The smile wore off Piya’s face. She took a deep breath and looked into the wide open eyes that were looking at her with excitement. Those dark black eyes, that forehead, the curled locks of Lily’s hair made her resemble her mother, Lily’s favorite grandma. She didn’t want to believe her own voice when she heard herself saying “Yes, dear”.

The train journey to grandma’s house was a long one. Lily had packed her books, her doll and a couple small round boxes. The boxes were filled with grey, red and black sand. She was thinking of all the games she played with her grandma. Grandma was a resourceful woman. She always had interesting games ready for Lily. She would bring different grains and lentils from the jars in her kitchen, and the two of them would spend hours in the veranda creating colorful art. Sometimes they would play with beads and shells, and grandma would show Lily how to count using those. Sometimes they would sneak out to the backyard and grandma would teach Lily how to read. It was their secret project that had kept them busy for some time. When one day, Lily read a whole sentence all by herself, the most proud person in the room was Piya as she could not believe that her two and half year old baby was reading. Lily and grandma had so much fun unleashing that surprise on Piya.

Lily had been waiting to show her grandma the boxes of sand that she had bought on her recent trip to the beach. She turned to her doll and exclaimed, “Oh, this sand is going to make the bestest art!”. The doll nodded in amusement for she could never exactly figure out all the games Lily and her grandma played. When she looked outside, the train had zipped out of her town and they were now surrounded by green pastures. Soon the pastures passed hurriedly as if they had sensed Lily’s urgency. 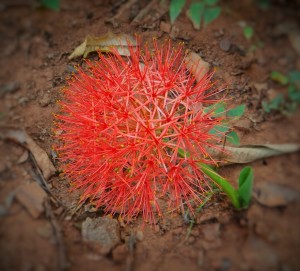 Lily rushed through a familiar wooden gate and paused at the veranda. There was a lady sitting in a large rocking chair. As soon as she saw Lily and Piya, she got up and smiled. But Lily knew where she had to go to find her grandma. She entered the house and before her feet could feel the cold stone floor, she ran straight to the backyard. Grandma’s backyard was huge. The grass here didn’t have the bright green color that she had seen during their train journey but rather a yellowish hue that made her instantly feel welcome. A huge mango tree stood in the middle of the backyard. A few tiny brown sparrows and black crows always found something there to peck at.

On one side, there was a small patch where rows of red mayflowers would bloom around monsoon time. The mayflowers were the most interesting part of that backyard. Some called them fireball lilies for they were always so bright and lively. They had a huge round flower-head, where dewdrops liked to sit and chit chat in the sun rays of early morning. But the coziest place was the steps of the house that extended into the backyard. You could sit on those steps in the comforting shade of the roof and watch the birds for hours. It was Lily’s favorite pastime when she was not busy pouring over the stories grandma had written for her. Her grandma had written lots of books for grown-ups too. That was enough reason for Lily to try and grow up as fast as she could. This is where grandma would bring a large steel plate with warm rice, ghee and a flavorful mixture of spices that only grandma knew how to make. She would mix everything together, make tiny balls of rice and feed Lily. Lily thought of the snack she had last eaten in the train and wondered if it was about time to demand those perfect round rice balls. Her eyes wandered everywhere in the backyard looking for grandma.

“Hello!”, she heard a small voice and turned around to see that there was a single mayflower that had bloomed in the patch. “Oh, hello! Do you know where my grandma is?”, Lily asked as she tiptoed towards the mayflower. “I know that your grandma is gone.” As usual, Lily had lots of questions to ask but something definitive in the mayflower’s tone made her pause for some time. “What do I do now?”, she finally managed to ask. “Well, you can sit next to me and try to catch these dewdrops”, said the mayflower. “Oh, is it okay to do that? They don’t let us do anything like that in my school.” “This is not your school, is it?”, winked the flower and continued. “Let me tell you a secret. I am not supposed to be here until the first monsoon rains but I sneaked out and came here to meet you”. Now it was Lily’s turn to giggle. “Oh, is it okay to do that?” She thought it was quite defiant of this little flower to do that. Finally she said, “I think I miss my grandma. Is it okay to miss my grandma?”. The mayflower shook the dewdrops off and straightened its head. “Oh yes, it is okay. It is okay to miss her forever”, the flower’s voice was suddenly louder now. “Of course it is okay to do what you want to do. It is okay to be all that you want to be”, and the flower talked and talked.

Sun was shining brightly again as Lily rushed inside the house. The lady who had greeted them on the veranda was lightly patting her mother on her shoulder. Lily ran straight into her mother’s arms and declared, “Mumma, I am going to be a writer just like grandma!”. Before tears could gather in Piya’s eyes, she had managed to smile. “Yes, dear”, she simply said. They held hands and walked around in the house with its open windows that showed glimpses of the large backyard. The mango tree stood there silently and there were no birds to be seen.

Soon the two of them walked out of the wooden gate. Lily had just realized that she had forgotten to pack her pencils. One always starts with a fresh supply of sharpened pencils and paper if one wants to write all those stories. She was thinking hard as she walked towards the train station. She was going to write many stories and maybe use the colorful sand to decorate her paper. Yes, that would look nice. That made sense. She climbed inside the train and sat next to her mother.

It was the end of a long day. As she closed her eyes, she could already see her first story with its beautiful sand art. The story was of course going to be about her beloved grandma and a spirited little mayflower.

3 thoughts on “Lily and a backyard that had mayflowers”