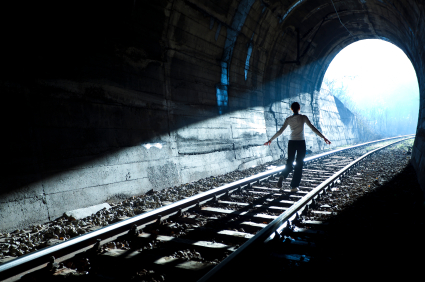 “There is no light at the end of the tunnel” I said to myself. I was irritated. Nothing that I was trying to fix the situation was working. Maybe I was trying too hard. Maybe it was time to just let it go. But when you are that close to giving up, you sometimes tend to laugh. So I laughed. I also found it amusing that the phrase ‘light at the end of the tunnel’ had popped in my mind. So then I did what I typically do when a phrase pops up like that – I googled it!

“If you see light at the end of the tunnel, it is the oncoming train” ~ Robert Lowell. Ha! Well said Mr. Lowell. Okay, what else does Google have for me? “The light at the end of the tunnel is not an illusion. The tunnel is.” ~ Unknown. Whoever came up with that – nice! And soon the cells in my brain that love wordplay got into action and I decided to play a game where you try to list a few other ways to use that phrase.

You can play this game with any phrase. First look at the phrase one way, then look at it another way, then turn it upside down, then turn yourself upside down, be silly, take the words apart and twist-twist-twist till the brain cells get a good exercise. Keep writing what comes to your mind. Do this fast for a few minutes and  then take a break. Then repeat one more time. You can then sit back and appreciate the power of words – their ability to both communicate and cause confusion. You can see the absurdity of language and the danger in attaching a precise meaning to it. You can wonder how attractive language is with its almost-infinite nature…but I digress. Coming back to the list, here is what I came up with:

Alright, now you play the game. It’s fun! I don’t guarantee that playing this game will show you the light at the end of the tunnel, but it will make you smile and that I promise! :-)