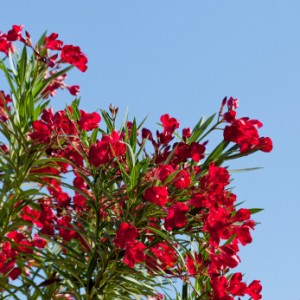 When I read the book ‘We the Living’ the first time, I could not understand the ending. The author, Ayn Rand, has said that this book is the closest she came to writing an autobiography. Ayn Rand left Russia and eventually lived a nice life as a US citizen.

[Note: this post reveals the ending of “We The Living” and “Red Oleanders”.]

However ‘We the Living’ ends when Kira, the central character of the story, attempts to cross the Russian border and is shot dead by the guard. She rests so close to the border, that you know that she must have almost caught sight of the freedom she yearned for. I always wondered if Ayn Rand didn’t care about making the story similar to her real life, and wrote the ending this way just to make an emotional impact. It was only years later that I could get myself to read the book again, but it had the same effect even that time around. Even the various interpretations of this book were not convincing enough…until I came across Nandini in Rabindranath Tagore’s play ‘Red Oleanders’.

‘Red Oleanders’ unfolds a similar drama and it unfolded Kira through Nandini. Both the stories include the tyrants and the oppressed as well as the scholars and the simple-minded. Both have the hero and the villain, who is not so much of a traditional villain, and is also loved by our heroine. Rand personifies hell on the backdrop of Russia after the revolution; whereas Tagore goes a step further to say “There must be beauty even in hell; but nobody there can understand it, that’s their cruelest punishment”.

The heroines themselves exhibit similar charm, freedom and an unfaltering will to go on. And they both come with that tinge of enigma that makes you want to know more about them. One of the characters in the play asks Nandini: “Who are you? I’ve never yet been able to understand you.” (Nandini says) “I am nothing more than what you see. What need have you to understand me?” “I don’t trust what I can’t understand”. It’s true. How do you trust them if you cannot understand them? You may be able to only feel them and you will just have to leave it at that.

In the end, when both the heroines meet death, it is not that they manage to turn the hell into a heaven by then. They only see the beauty in the hell and leave behind something that has the potential to make others see that beauty. Nandini and Kira – they are like two feathers of the same bird that leaves the cage and soars high in the sky. Nandini leaves behind a few of her crushed blood-red oleanders and Kira a few droplets of her own red blood. In the end, both lie victorious in the realization of the most beautiful phenomenon of creation…that which is called death.

[This is a note I had written and shared on Facebook in August, 2009. I am adding it here for it’s fun to see how I used to write back then. Plus now that it’s here, I can use the blog’s plugins to do some cool analysis on it!]