Fifteen years ago, the legend called Sir Elton John was going to visit a city near our campus. We were all excited and started discussing how we would get there and to the concert. Given our official ‘poor student’ status, that would have meant shelling out quite a bit of money but this was a show that could not be missed. As it turned out, our plans stayed just plans. But fast forward fifteen years…and Elton John came to town again. This time it was a different place, a different decade, a different set of friends, but the same excitement was in the air as our plans became a reality and we were off to the concert.

The moment Elton John entered the stage there was an outburst of applause. My first thought was that he looked old. At the age of 66, he was indeed old and I guess he just looked his age. Within the next three minutes though, the Elton John fingers were making magic on the piano and any illusion of “old” quickly went out the door. This dude sang for three and half hours non-stop throwing one song after another as if he was handing out candies on a busy Halloween night.

The songs that had played for years, first on a CD player in my house and then on my phone had become alive and brought their creator with them. As he sang Your Song, the words “My gift is my song and this one’s for you” filled the auditorium. In that moment, all the stories that one hears about the celebrity that he is, all his eccentricities, his fashion and other details of his personal life collapsed into one reality – he was the master who had owned his songs and served for over 40 years. He was the one who had started drenching our souls even before we knew, even before we were born. 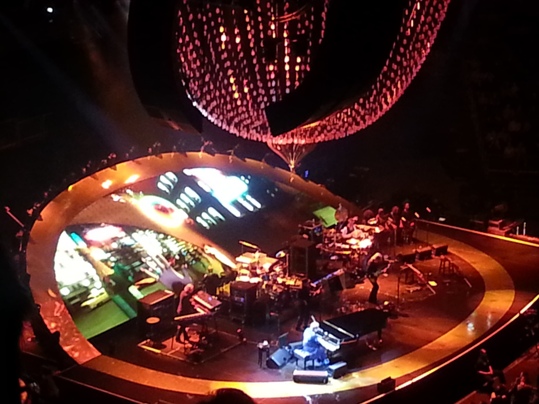 As the night progressed, the songs kept coming. At one point, he jumped on his piano, then made a successful landing down and continued to hit the keys and pound our hearts. After every song was over and the final key had been hit, he would get on his feet, throw his shoulders back and extend both the arms to the audience as if to say “folks, what do you have to say to this?”. The audience would respond by clapping, cheering and throwing their arms towards him. It was both a salute and a hug for the maestro.

Finally, he sang one of my favorites – Don’t Let the Sun Go Down on Me. That was followed by us echoing him with our ‘la la la la la’ on Crocodile Rock. And soon there were no more songs. We realized that he had not sung Circle of Life. As he started leaving the stage, I joined a few people who had started a weak chorus of ‘circle, circle’ to make our wish clear. But he was gone. That night, he himself was the sun that rolled high through our sapphire sky and bound us permanently to the circle of life.