It all started when he climbed Kilimanjaro. We hosted celebratory parties and raised our fine champagne glasses. My son even wrote a poem to congratulate his dad on this fantastic achievement. We figured that all this cheering was very apt and that we were ready to get back in the routine. What we didn’t know was that a piece of Kilimanjaro had rubbed off on him and in turn entered our lives. Suddenly there was a flurry of outdoor activities. Very often on Saturdays, we left our cozy couch and ventured out on hikes as if that was totally our weekend thing. Soon the pantry was stacked with Gatorade and protein bars and the likes. In the middle of all this outdoorsy-ness, one day, I found myself discussing bicycling with a couple of my friends. The next thing I knew, I was on a biking trail on a crisp day in Fall, for what would be the beginning of a long bond with that trail. 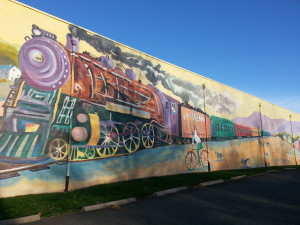 As I stood there, miles and miles of road was spread in front me. I was wearing my favorite hoodie and tights, ready to ride my lavender mountain bike. A tiny purse was hanging on the handles, and in it there was a small snack and my phone. My obedient phone was going to keep track of the distance and victoriously announce every mile that I would cover. I breathed the fresh air and started pedaling. This was fun! Speed, I am speed. And wham! Two bikers in their tight biking outfits, thin tires of their race bikes spinning in unison, their backs arched and eyes focused on the road, zoomed by with a speed my phone could not fathom. Their bright bike jerseys disappeared in a flash. I kept pedaling even when I couldn’t. I was now convinced that my stupid hoodie was messing the fine aerodynamics that was almost mandatory on that trail. I cursed my heavy mountain bike when I pushed the damn thing all the way up a hilly portion of the trail. And then I saw them again and again, bikes with their razor sharp tires, bikers that sipped water without skipping a beat, calf muscles chiseled in stone, and attitudes that were there to conquer the trail. My phone whispered that I had completed 5 miles. I guess it was a start. 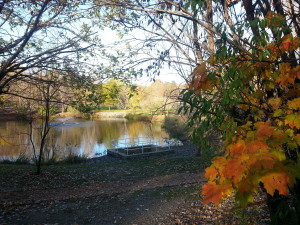 The trail didn’t say much. It was there. You could make of it whatever you wanted to. As the Fall colors shone in their full glory, I ached to go back more on that trail though. Riding on that trail was actually a perfect way to slow down. Every year, I am fascinated by the phenomenon that is the Fall colors and I marvel at how fast they show up and disappear. This time, as I pedaled my bike, I soaked into the colors one leaf at a time. The landscape was moving one frame at a time. Some peach colored maples were busy showering their leaves on the black trail. I could have caught a few in my hands and scattered them in the air. My lavender bike with its black tires was moving smoothly. I was the breeze flowing through them.

As I biked more, I noticed more. There were all sorts of people out on that trail – running, biking, and simply wandering around. You would see a couple holding hands, little kids behind their father happily pedaling a tandem bike, and friends with coffee cups in their hands. One day, an old guy biking on the other side smiled and waved at me. I smiled back and before I had time to un-smile, I was facing another biker. She thought I was smiling at her and so she smiled back. Sometimes bikers in front of me would give a heads-up of cars that were passing at an intersection. Sometimes I would see the same people I had passed and a glimpse of recognition would flicker on their faces. One day, when I stopped on the side looking for my snack that had jumped out of my purse, a biker slowed down and asked if I was okay. Another day, I biked with a couple of my girl-friends and we did everything that was not in the trail rule book – we talked non-stop, we giggled and we cheered when we saw upward slopes. The trail always had its varied faces – determined, tired and smiling faces. The trail itself was that one never-changing constant. It always said only one thing – just keep pedaling. Why? Because you can. Because a trail never ends. 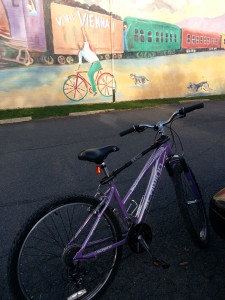 Today I kept going to complete a 20-mile bike ride. It was the third time I had done it this month. After the ride, I decided to sit down on a bench and stretch my feet. I ate my snack, clicked a few photos, and then instead of rushing back home, I pedaled another 5 miles. When I saw the lot where my car was parked, I gave a sigh of relief. A sense of calm fell upon me or maybe it was just the tired body that had managed to clear my mind. I lifted my beautiful mountain bike with both my hands and the last ounce of energy left in me (in my mind, I was totally lifting it with one hand as I was giving a triumphant laugh) and put it on the bike stand on my car. I was ready to go home.

1 thought on “Because a trail never ends”